The main goal of the project ‘Interaction of Turkic Languages and Cultures in Post-Soviet Kazakhstan’ is to clear up the sociolinguistic situation of Turkic ethnic groups in Kazakhstan.
During the Soviet times, the dominant language in Kazakhstan was Russian. After the Republic of Kazakhstan came to existence, Kazakh was established as the state language, Russian still being an official language in Kazakhstan. Turkic ethnicities endure the double pressure of both dominant languages at present.
The sociolinguistic questionnaire was created in the initial stages of the project. The data is collected by students of L.N. Gumilyov National University (Astana). Furthermore the students used the outcome of their questionnaire for their qualification researches.
The results of the sociolinguistic questionnaire shows, that there are interesting mismatches regarding nationality as written in the passport and their self-identification.

Sociolinguistic research was conducted on the basis of a sociolinguistic questionnaire developed by the project participants. The questionnaire includes the following sections:
- self-identification, ethnicity and nationality according to the passport;
- Definition of nationality in inter-ethnic marriages;
family history (history of family migration);
- language competence, use of languages ​​in various situations;
- state support of Turkic ethnic languages ​​(teaching in schools, mass media, etc.);
level of education, etc.
Sociolinguistic research was conducted by students and undergraduates of the Department of Turkic Studies of the ENU. L.N. Gumilyov (Astana), TarSU named after A.Sh. M.H. Dulati (Taraz).

Expeditions within the framework of the project

Field research has made it possible to collect a unique language material on the Turkic languages ​​of Kazakhstan. Records of audio and video materials were documented, and then transcription was made for each individual passage of oral speech. After the interview is over, the metadata form is filled in.
Metadata questionnaire
To keep an overview of all informants and recorded data, metadata questionnaire have always been used. It includes questions about the interviewed person, such as name, mother tongue, other spoken languages, places of residence and so on.
Further on, the questionnaire gives information about the interview – who was the interviewer? How is the quality? Who was recording? What is the subject of the interview?
Every of these information are needed for Arbil.
One of the most time consuming tasks is to transcribe the recorded material.
The IPA (International Phonetic Alphabet) is used for the transcriptions of the collected data.
The most important task is analyzing the data morphologically. This includes work with ‘Field Linguist’s Toolbox’. Via Toolbox it is possible to make an interlinear glossing. The German participants of the project analyzed the data on morphological base, part of speech and the glossary. In this way, they created own dictionary for the material.
One of the languages under the analyses is Axiska Turkish, which is not being a literate language. There are many varieties of the words, especially in the phonetics. Therefore the different phonological varieties of one word under the linguistically transcribed word have been connected. 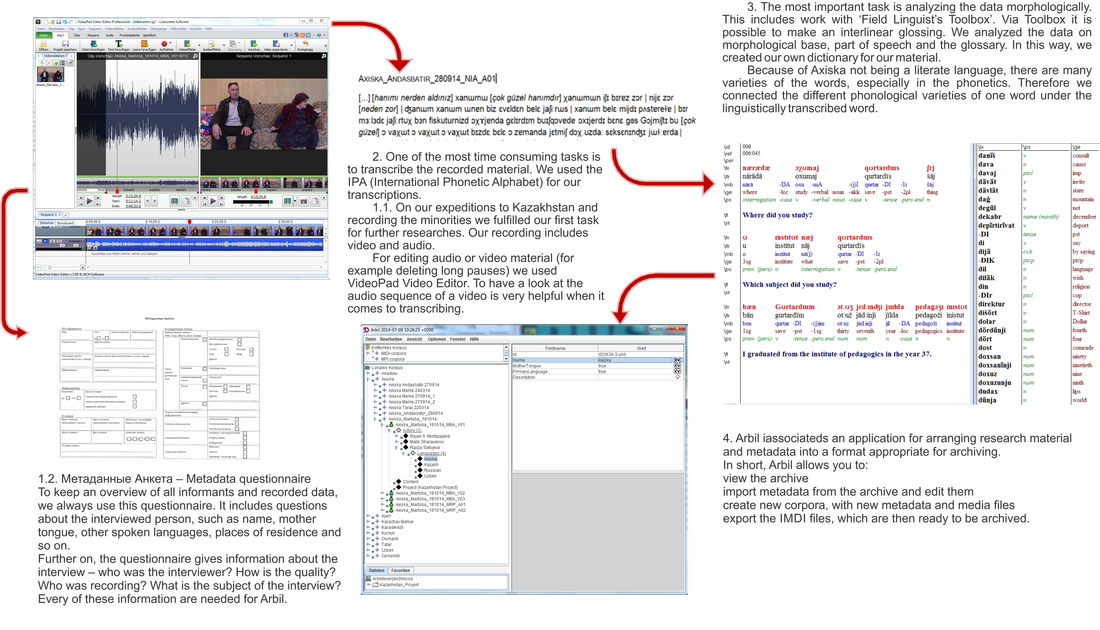 ​Algorithm for working with the record

​Example of work with ELAN

Project values for the Kazakhstani Education and Science

1. Active involvement of students and postgraduates in the scientific research. The students of the specialty "Turkology" during their training practice together with the students and the postgraduates of Frankfurt University participated in the survey and the field research held in the regions of Kazakhstan (Taraz, 2014; Almaty, 2015). The Students of the specialty “Information Systems” recorded the data of the survey from paper to electronic media, participated in the development of the project database and its visualization.
2. The results of the survey have been processed and synchronized in a database developed by the programmer of the project, Master of Computer Science Zhanar Beiseeva. The special significance of the project database is that it is in open access, and can also be used in the educational process during lecture courses; practical classes; writing diploma papers, master's and Ph.D. dissertations. The creation of a database allows all interested persons effectively use the sociolinguistic and ethnographic data. The developed information system allows constantly replenish and process new data.
3. The results of the field research are used in the educational process. The new elective courses – "Bilingualism and Multilingualism in the Republic of Kazakhstan" and "Comparative Lexicology of Turkic languages" have been introduced to the curriculum of elective disciplines in specialty 5В021200 – "Turkology".
4. For the first time to conduct research on the language and culture of the Turkic ethnic groups in Kazakhstan was created an electronic database. The given database is stored in a table format of Excel format. In the database for the researcher's queries can be used the search filters. In the filtered data are displayed only the data corresponding to researcher's queries the other information is hidden.
The sociological (sociolinguistic) survey data on the project are visualized in the form of diagrams, graphs.
5. For a number of unidentified Turkish idioms has been created a database of linguistic data. The database is located on the server of the Max Planck Institute in Nijmegen on The Archive of Languages website in the open access.
6. The Volkswagen Foundation supports the initiatives of Kazakhstani scientists who are expanding and deepening research within the framework of the "branch" ("daughter") of this project. Sociolinguistic data of the international project served as a background for the Kazakhstani project "The Turkic World of Kazakhstan: Language Variants, Cultural Archetypes, and Identification of the Turkish Diaspora" funded by the Ministry of Education and Science of the Republic of Kazakhstan.
Kazakhstan researchers have mastered the innovative methods of documentation in accordance with international standards, which are used by researchers of the German Turkological School. The joint scientific collaboration allows strengthening and expanding further international cooperation and effective promoting of new projects in the future.
7. Within the framework of the project were prepared one diploma project, five Master's dissertations and one Ph.D. thesis.
More than 40 scientific publications on the subject of the project have been prepared that demonstrates the high effectiveness of the research and the effective involvement of the project participants in solving the scientific problem.
8. Within the framework of the project the students of Frankfurt University conducted their scientific practice participating in joint expeditions in the regions of Kazakhstan, collecting and processing linguistic data:
Nida Ocak
Dilek Azbak
Begimai Usubalieva
Cem Koc
Hatidzhe Emin
Ebru-Meriem Özkan

* "The study was supported by the program" Grant funding of scientific research on
2015-2017 "on priority" Intellectual potential of the country "5235 / GF 4" Turkic world of Kazakhstan: language variants, cultural archetypes, identification of the Turkish diaspora ", funded by the Ministry of Education and Science of the Republic of Kazakhstan."
The participants of the project express their gratitude to the representatives of ethno-cultural centers of ANC, who rendered great support in organizing field research.